[lang_all]In February 1998 Sy Aliisa became my home. In 2004 she took me to the world. I had no pension plan, no property and no safety nets to fall on. With only my savings, a boat and my heart, Life welcomed me. This site is about the journey, where it took me, where it’s taking me, and bit more…

You can’t go cruising without setting a date. My date is 31 July 2004. Because if I don’t have a date, I’ll never go. As soon as you set a date, your dream will transform from a wish into an inevitable event. The difference can be scary because suddenly you’re not telling others what you would like to do, but what you will do.

My first date was 31 July 1999. That departure finally happened in September 2001 and the plan never came true. After recovering from my disappointment as well as the theft of a brand new zodiac and outboard in July 2002, I finally set a new date for another attempt. Life is a lot easier when you have goal. 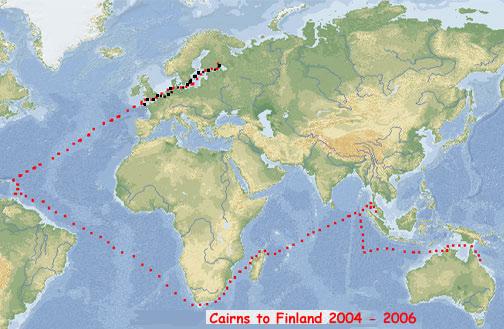 The beginning and the end:
Leaving Cairns was easy. In contrast to my departure (with Phil) in 2001 to PNG, there is no farewell party, no emotions and no feeling of a significant change.
Instead of setting out to sea, Paula and I are just sailing up the road. I’m not concerned about the fact that there is still work to be done. The alternator doesn’t charge, there is no reefing lines for the mainsail and the inside is less than ship-shape.
Phil arrives on the afternoon to say goodbye with a cask of wine. Our good-byes last until 4am. I am still drunk when we leave at 7am next morning but that doesn’t bother me either. I’m ready to leave. I unfurl the genoa and make a sailing start from the CCYS marina. The tidal flow starts to push us towards the yacht on the next berth in front of us and there’s not enough breeze to sail out of the way. I run down and turn the key. My new 36hp Yanmar responds and we drive off, blasting our aerosol horn for a goodbye. Wind arrives in a few hours. We leave the mainsail down and wallow in the following seas.
I nearly throw up my champagne breakfast at 3pm. The wind is sitting on 25kn and Aliisa is rolling from side to side. At five in the afternoon we anchor up in Low Isles, 30 miles north of Cairns, and I know I can finally sleep as long as I like, as many mornings as I like.

When stories about ocean voyages and adventures get published, they are usually called epic, or some other grand word and the the chapter headings and dots on the map representing the voyage read: January 13 Capsize, July 1 Broken mast, Shark attack, Pirate assault, freak waves, running aground and other disasters that the hero of the story miraculously survived to tell. You would not consider the story interesting without some passages of being knocked down, pooped, frozen, burnt, diseased, battered, lost and so on.
This poses a huge challenge to my writing. You see, I don’t plan to do any of the above. I am deeply concerned about the contents of my stories. I do not have any desire to capsize, be attacked by sharks or loose my mast. I much prefer to sail downwind, quietly with a glass of wine while the autopilot drives, soft music comes out of the speakers and sun warms my already tanned skin. And that’s exactly what Paula and I are doing.

I managed to kick the shit out of my big toe, only 10 minutes before departing Cairns. The bottle of champagne we had to celebrate our departure provided a convenient toe-guard for the passage

I managed to kick the shit out of my big toe, only 10 minutes before departing Cairns. The bottle of champagne we had to celebrate our departure provided a convenient toe-guard for the passage.
After three days of rest and tidying up at Low Isles, we sail to Port Douglas, 8 miles away, to sort out our first “problem”; the non-charging altenator. With no reason at all, we treat ourselves to a marina berth for two nights. We’re easing into the cruising. A 4am departure followed by a 10 hour sail takes us to Hope Isles. Backgammon on the beach.
A daysail to Cooktown. No beach. Walk up the highest hills and buy more fresh food. I manage to connect to the internet in the local computer shop.
The voyage starts with daysailing. The boat is loaded with all the food we like and for the next week or more we don’t have to worry about rationing anything. Port Douglas and Cooktown, though more expensive than Cairns, offer opportunities to stock up with fresh goods. We eat nachos with fresh avocado and sour cream, spaghetti bolognaise with fresh mince and chicken caesar salad. Like Captain Cook and his crew on Endeavour, 230 years ago, we wash our food down with wine or beer. Life’s good.

Forbes island is marked on the chart behind the line of "unsurveyed". Yet, the approach is easy and water is mostly clear of dangers. Two days of naked walks away from the world. Wish we had stayed a week.

Forbes island is marked on the chart behind the line of “unsurveyed”. Yet, the approach is easy and water is mostly clear of dangers. Two days of naked walks away from the world. Wish we had stayed a week.
Paula is going through some more adapting than me. Twenty-odd weekends onboard – mostly in the harbour – and a two week sailing holiday two years ago does not provide much familiarity to her new life in her new home. I’m simply at home and the enormity of the voyage ahead is still out of my mind’s reach.
There is a lack of closeness between Paula and me. Being at sea is a personal refuge for me. I like being out with my thoughts and away from all obligations of the world.. Thoughts that are not readily explainable and obligations of living in a “world of others”. I stay silent a lot more, gazing at the sea and soaking in the feeling of being on it. I’m a selfish bastard, I suppose, I drift into my own little world and start ignoring others.
Paula is relaxed on the outside but I sense an uneasiness beneath. Yet, she actively takes on her share of the duties, keenly stays behind the wheel and within a few weeks, handles the sailing and navigation to the point that I can happily go to sleep at any time during the legs up the coast.

The biggest fish we caught so far... ok, Paula did, was only big enough to be cut in pieces for bait. Paula eventually fed it to the bigger ones and kept pulling back a clean hook.

The biggest fish we caught so far… ok, Paula did, was only big enough to be cut in pieces for bait. Paula eventually fed it to the bigger ones and kept pulling back a clean hook.
After living in the tropics for so long, a palm fringed island surrounded by golden beaches and coral reefs is not worth corking a shampagne. We simply discuss what to put in the dinghy for the afternoon, set camp under the palms on the beach, play backgammon, drink wine, read books and play nintendo games. It’s like an extended picnic or a gigantic weekend that has no end in sight. I’m not complaining. Being a bit of a naturalist, I enjoy running around naked, not just on the beach but climbing the hills and exploring the bush of where ever we are. (Climbing the highest peak is the standard excercise every cruising yachtie does on each island they visit.)
I’m feeling lazy and relaxed to the point of apathy. My sister once commented on my life philosophy being very passive; I’m not one to fight for a cause. I find this passiveness reaching new hights. Cooking, sailing and daily chores are done lazily, if at all. I sometimes even start the sail with a reefed mainsail so if the wind picks up I don’t have to put the effort in to reduce sail. If the wind stays light, I’ll reason to myself that undoing the reef would gain very little and leave the sails untouched.
I spend my time gazing at the horizon, peering the coastline with binoculars or sitting down with a cold beer and smoke. With the downwind passages, even strong winds give us very little challenge to get to our next anchorage. Low Isles, Port Douglas, Hope Island, Cooktown, Lizard Island, Flinders Island, Morris Island, Portland Roads and Forbes Island. Then finally Thursday Island, the true top of Australia. Despite all the laziness, my body is becoming more toned (and tanned), I’ve lost weight and I feel healthy. Before heading to the pub in Thursday Island, we walk to the public swimming pool where I swim 1km and have a wash.

When crew is tired, the Skipper takes over